The Medicine Hat ALERT Regional Property Crime Unit has recovered a quantity of small tools and camping items, stolen from stored camping trailers in the South West area of the city over the last four weeks. If you have been the victim of such a crime in that area and can identify missing property, please contact the Medicine Hat Police Service at (403) 529-8481 and ask to speak to a member of the RPCU.

The investigation into the sudden death that occurred in the 1700 block of 17th Street SE on October 6, 2021 is ongoing, in conjunction with the Medical Examiner’s Office, however there is no indication that this is a criminal matter and there is no risk to the safety of the public.

No further information about the investigation or the identity of the person will be released.

Our condolences are extended to the family & friends of the deceased.

National Day for Truth and Reconciliation

Establishing this new statutory holiday was recommended by the Truth and Reconciliation Commission Calls to Action ( see #80) and is intended to be a day to honour Survivors, their families, and communities, and ensure that public commemoration of the history and legacy of residential schools remains a vital component of the reconciliation process.

This day provides an opportunity to reflect on how we can advance our reconciliation efforts to build a better future for everyone in our community.

At the Medicine Hat Police Service (MHPS) we are committed to building meaningful partnerships with our local Indigenous community and finding ways to include Indigenous worldviews in our daily practices and policies. Some important first steps we have taken this year include, adopting the Eagle Feather, creating an Indigenous Liaison Officer position, and establishing an Indigenous Advisory Committee. To date we have held two committee meetings and have found tremendous value in the conversations. We hope to continue our learning and grow our understanding through the development of these important relationships.

Tonight, at Riverside Veterans’ Memorial Park the Miywasin Friendship Centre will be hosting an event that will include prayers from Elder Charlie Fox of the Kainai First Nations, an honouring ceremony for residential school survivors, Buffalo Calf singers from the Nekaneet First Nations and Miywasin singers. For the safety of everyone in attendance participants are encouraged to wear a mask and social distance. 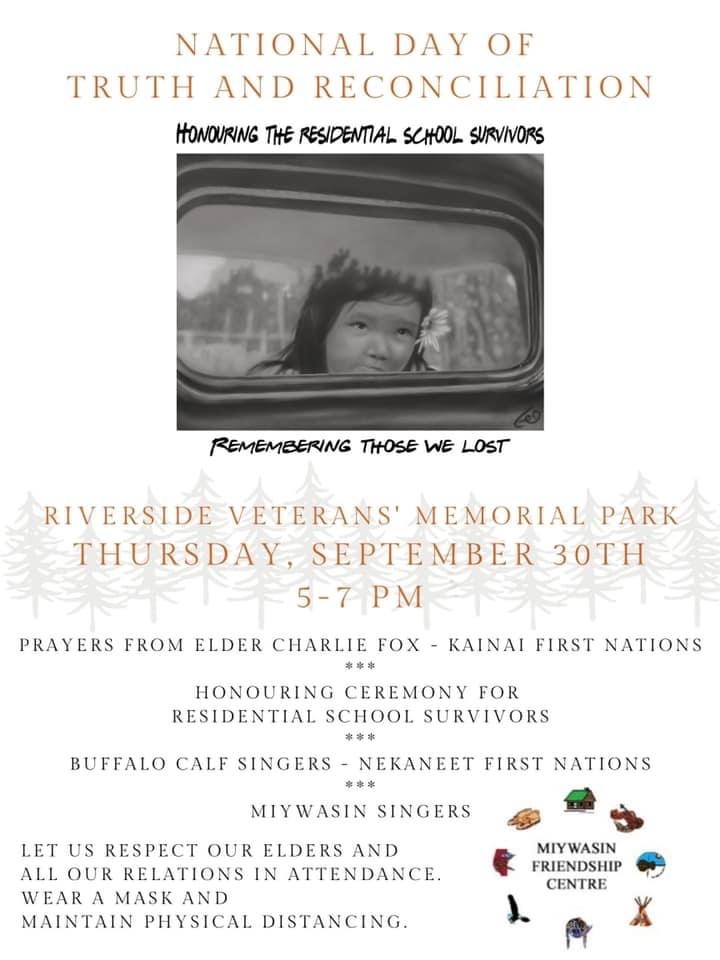 Today our MHPS Patrol Teams will be wearing orange ribbons on their duty uniform and the exterior lights of the MHPS building will glow orange tonight in recognition.

On September 29, 2021, at approximately 3:12 pm a Chevrolet Traverse was travelling north in front of 4000 13 Avenue SE. At an approaching crosswalk, southbound motorists were stopped for pedestrians and cyclists who were crossing the road. The Chevrolet Traverse did not stop, and struck a young male cyclist. The female driver was uninjured in the collision. The male cyclist was taken to hospital with undetermined injuries.

Total damage to the vehicle and bicycle is in excess of $10,000.

The MHPS Traffic Unit continues to investigate the collision and thanks all witnesses that provided information in regard to this incident.

Please drive safely and be mindful of pedestrians and cyclists crossing roadways.

During the early morning hours of September 24, 2021 members of Medicine Hat Police Service (MHPS) Patrol Section were on patrol in the area of Gershaw Drive SW, when they observed a male underneath a vehicle.

Police attempted to speak with the male however as officers approached the male he attempted to leave the area on foot. Police were able to take the male into custody soon after without incident and the initial investigation revealed that he was attempting to steal catalytic converters.

As a result, a 43-year-old male from Hamilton, Ontario has been taken into custody for possession of break in instruments, and mischief under $5000. The male is currently held in custody awaiting a judicial interim release. Police have also located a large amount of stolen property, believed to be from across Canada and will be following up with additional charges and attempting to locate the owners of this equipment.

There has been an upward trend in thefts of catalytic converters both locally and across the province over the past couple of years, as they contain precious metals such as platinum, palladium, and rhodium. Thieves will often remove the catalytic converter by accessing it from underneath vehicles.

In 2020, the province of Alberta recognized the prevalence of this issue with the introduction of Bill 25, Protecting Alberta Industry from Theft, which resulted in amendments to the Scrap Metal Dealers and Recyclers Identification Act. The act created new regulations setting out standards for the scrap metal industry. The new regulations determine what information is collected by recyclers and is available to police. It also requires all recyclers to standardize how they report the sale of scrap metals.

If you have information about a similar offence, please contact the MHPS at 403-529-8481 or submit a tip via the website (mhps.ca) or mobile app, which is free to download and available for both Apple and Android devices.

On September 25, 2021 at 11:08 AM members of the Medicine Hat Police Service Patrol Section and Major Crimes Section responded to a report of a deceased person located in the area of 580 1st Street SE.

An investigation in conjunction with the Medical Examiner’s Office is ongoing, however there is no indication that this is a criminal matter and there is no risk to the safety of the public.

No further information about the investigation or the identity of the person will be released.

Our condolences are extended to the family & friends of the deceased.

The Medicine Hat Police Service is requesting the assistance of the public in locating a missing person.

Neil Holton was reported missing to the Medicine Hat Police Service on September 23, 2021.  It is believed that Holton is hitchhiking east via Highway 1. He was last seen on September 17, 2021, in the Maple Creek, Saskatchewan area.

He was last seen wearing all black coloured clothing, a bright orange camo neck warmer, carrying a backpack and a sleeping bag.

Police believe that he has shaved his head, and has lost weight since the attached photos were taken.

Police do not believe that there is anything suspicious in relation to this disappearance, but would like confirm his wellbeing.

Police are requesting that if you have any information in relation to his whereabouts, to contact the Medicine Hat Police Service at 403-529-8481 or through the MHPS App which can be downloaded free from the App Store or Google Play

A local businessman was recognized with a Medicine Hat Police Service (MHPS) service coin for his role in assisting with a police investigation.

On August 21, 2021, a vehicle entry resulted in the loss of a valuable and sentimental piece of jewelry. The victim shared her story on social media which gained a great deal of exposure and assisted with the apprehension of the offender and recovery of the ring.

On August 24th, MHPS Cst. Williams attended to the King of Trade after being contacted by the shop owner, David Brown, to investigate a ring which had come into his possession. Mr. Brown had immediately suspected that the ring may have been stolen and paid out of his own pocket so that he could facilitate the return of the ring to the rightful owner. His quick and selfless action directly result in a suspect being arrested and the ring was returned to the rightful owner who was ecstatic.

The actions by Mr. Brown were exemplary and he was recognized by the MHPS for his instrumental role in the successful outcome of this investigation. 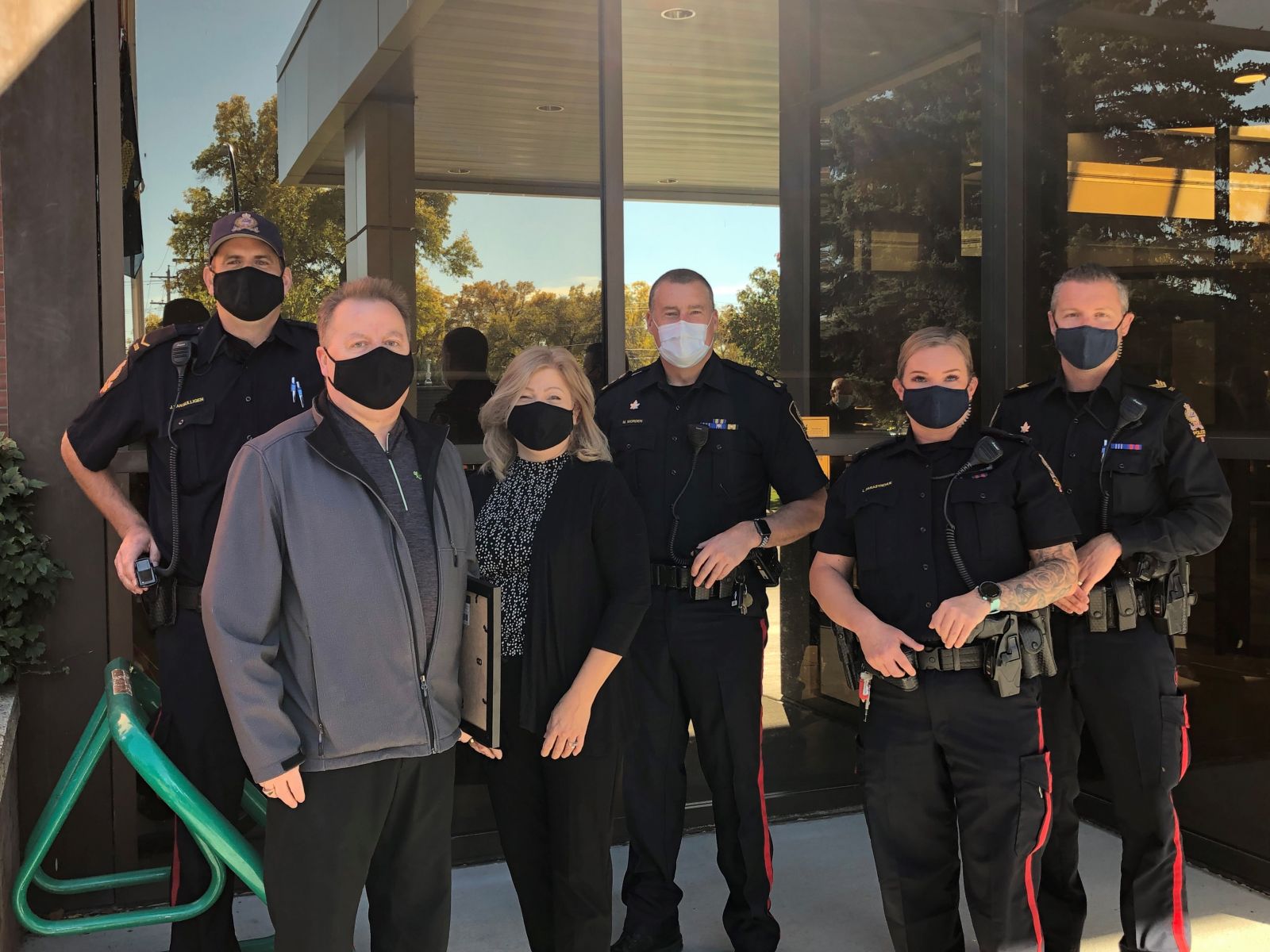 It’s with mixed emotions that we announce the retirement of Police Service Dog (PSD) Flint. Flint was born on September 20, 2014 in the Czech Republic and began working with the MHPS in 2016 at the age of 18 months. Flint underwent basic training with his handler that spring and was validated for service in June of that year, certifying in both general duties and drug detection. In the fall of 2019, PSD Flint’s handler resigned from the police service and Flint was re-teamed with a new partner, experienced dog handler, Cst. Jason Dola. During his career, Flint was deployed over 200 times and has been credited with dozens of criminal apprehensions.

Flint had some memorable deployments during his career. In January of 2018, police were attempting to apprehend the driver of a stolen vehicle that was operating with extreme risk to the public. The driver eventually got the vehicle stuck in a ditch and was attempting to free the vehicle to resume his dangerous flight from police. PSD Flint was deployed and fearlessly engaged the subject, ending the pursuit and eliminating the risk to the public.

During another event in July of 2019 PSD Flint responded with his handler to assist with a combative subject who police were attempted to arrest for a commercial break and enter. The subject armed himself with a golf club as police attempted to arrest him and assaulted police as they tried to take him into custody. Flint was deployed and apprehended the subject, immediately stopping the assault and allowing police to safely arrest the violent subject.

Over the past few months PSD Flint has developed some ailments that are affecting his ability to continue working. He will enjoy his final shift today, then will retire to the home of the Dola family where he will spend his retirement relaxing under the sun, chasing his favorite toys in the backyard, and eating his favorite ice cream treats. The MHPS would like to thank PSD Flint for his years of service to the community.

Additionally, thank you to Cst. Dola for his commitment and leadership to the K9 Unit and doing his part to ensure its success into the future. His willingness to put service before self is commendable.

Over the past month the Medicine Hat Police Service has observed a marked increase in the number of thefts reported from vehicles. To address this concern, we have increased patrols in areas of concern and have arrested and charged individuals responsible for some of the files reported.

Unfortunately, many times these thefts are simply crimes of opportunity with criminals looking for easy targets. Criminals will walk through neighborhoods, trying vehicle door handles, hoping to find an unlocked vehicle. The best way to prevent vehicle burglaries is to remove all your valuables, lock your vehicle’s doors upon exiting and take the keys to the vehicle inside your residence.

To help remind residents to take a few simple steps to protect their property, starting tonight, the MHPS is launching a #9PM routine campaign. Every Wednesday for the next month the MHPS will send out a nightly reminder at #9PM, via the MHPS mobile app, to remind residents to remove valuables from their vehicles, lock their vehicle doors, lock the doors to their residences, turn on exterior lights and activate all alarms and security systems. You can also set a nightly reminder on your smartphones or other devices as a reminder.

The MHPS mobile app is free to download and available for both Apple and Android devices. To report suspicious behaviour in your neighbourhood call 9-1-1 in an emergency or 403-529-8481 for all other non-emergencies.