The Chief of Police is responsible for: 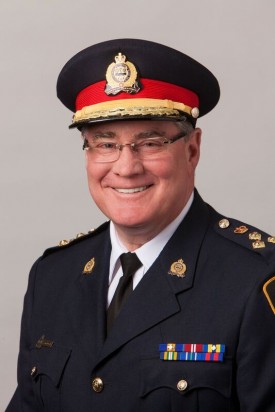 Andy McGrogan was appointed to the position of Chief of Police in November, 2008. Since joining the Service in November of 1980, the Chief has worked in a wide variety of positions including general Patrol Duties, Communications, Canine, Tactical Team Member and Commander, Criminal Investigations and Professional Standards and Development. After serving as an Inspector of both Support and Operational Services, he was appointed to Deputy Chief of Police in September of 2007 until his appointment to Chief.

In 2006, Chief McGrogan received his Masters of Arts in Leadership and Training through Royal Roads University. He has a passion for policing and finds pleasure in adding value to others. He is proud to be a part of the leadership team that serves the citizens of Medicine Hat by providing professional and progressive policing to the community.

Chief McGrogan continues to be very active in the community. He is a longtime supporter of many community organizations. He was a Board Member and Chair of the Medicine Hat Woman’s Shelter Society for six years and is a strong advocate in the community on issues that relate to violence against woman and children. He is the Alberta representative for the Canadian Association of Chiefs of Police and has participated on a number of other boards such as Canadian Intelligence Services Canada through the Alberta Chiefs of Police, and is presently the Board Chair for the Canadian Police Knowledge Network, a not for profit organization that provides online training solutions for police and law enforcement in Canada. In May of 2016 he was elected as President of the Alberta Association of Chiefs of Police.

In 2014, Chief McGrogan received the Order of Merit of the Police Forces. The Officer of the Order of Merit recognizes outstanding meritorious service in duties of responsibility over an extended period, at the regional and provincial level.